Hellenism’s values, ideas and legacy are a safeguard of the next generation’s future.  The NHS commitment to preserve this legacy translates to programs that impact society at the local and national level.  Through partnerships with like-minded organizations and leading institutions, the NHS welcomes grant proposals that preserve Hellenism’s gifts in meaningful and relevant ways advancing and improving society. 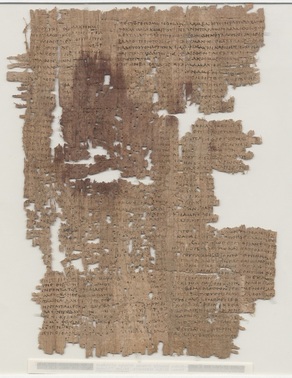 In the early 1900s, an incredible cache of ancient Greek papyri were discovered in the remains of mummified crocodiles worshiped by ancient Egyptians.  Tens of thousands of these papyri were brought to U.C. Berkeley in the 1930s, where they remained until a recent effort was undertaken to catalogue, conserve, and digitally image the collection dating back to the 2nd century BC.

Among the vast amount of text, fragments of Homer, Demosthenes and Sophocles have been identified. Also found in this ancient thesaurus, there is a fragment of “Dictys of Crete” – the Greek original of a later Latin narrative.

The NHS and the Elios Charitable Foundation are supporting the University of California Berkeley’s efforts. to decipher and analyze the papyri.