Honoring Hellenic heritage is a celebration of western values and man’s life mission to fulfill the endowed potential that each individual possesses.  The ancient Greeks reveled in deep thought; engaged in dialogue that led to truth; respected honor; loved beauty, music, literature, drama, art; and, of paramount importance, respected freedom and democracy.  The NHS celebrates this incredible legacy and heritage and is committed to disseminate these values to the mainstream in the quest of “Hellenizing” others that share these values irrespective of race, creed or faith—as Socrates wrote:  we are all “citizens of the world” 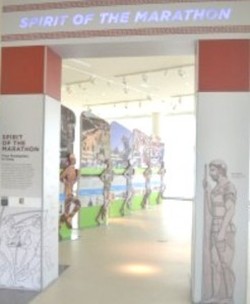 The NHS has developed a collaborative relationship with the National Hellenic Museum (NHM) in Chicago to support several projects that fulfill the common mission of both organizations: to preserve Hellenic heritage in America. Projects of the NHS/NHM Partnership include: The Spirit of the Marathon Project, a traveling exhibit celebrating the origins of Pheidippides’ historic 26-mile run and tracing the race from its roots to modern marathons, and the Oral History Project, which chronicles and archives the Greek-American story as told by videotaped individual oral histories.

Ancient Athenian political thought and philosophy directly impacted America’s founding fathers.  Ancient Greece’s notions of justice and governing forever changed the course of democracy in the United States to this very day.  The NHS is developing a documentary film entitled “The Athenians and the Americans” that will highlight the contributions and the effect of these ancient thinkers and writers on the Founding Fathers of America as relayed in a compelling and fascinating manner. To watch the trailer of “The Americans and the Athenians” Documentary please click here (Password: athens)