HERITAGE GREECE APPLICATIONS ARE BEING ACCEPTED!

Heritage Greece 2017 is an unforgettable journey to Greece tailored to connect students with their Greek identity and roots through a cultural immersion experience! The program was developed by the National Hellenic Society and is hosted by The American College of Greece (ACG).  Heritage Greece is a once in a lifetime opportunity to explore Greek heritage, culture and identity with a peer group of students from the US and Greece. The program is a gift from the NHS to the participants. Students bear a portion of the airfare costs to and from Athens, while expenses including tuition, transportation, meals and related costs are borne by the NHS.
CLICK HERE TO LEARN MORE ABOUT HERITAGE GREECE!
Apply to Heritage Greece 2017!

THE GREEK GUIDE TO GREATNESS

The Greek Guide to Greatness (GGG) allows one to view the modern world through ancient eyes that help us understand the past, shape the present, and see into the future.

Thanks to historians, scholars, and archaeologists, the Greeks' once elusive greatness has been studied, analyzed, and dissected. The problem was, to really grasp their secrets, you would need to read textbook after textbook, attend countless lectures, or maybe even get a degree. Well, not anymore! Now, thanks to the idea-sharing capabilities of the Internet, the secrets to ancient Greek greatness are right at your ﬁngertips and easily accessible in GGG. Like a video handbook, it is composed of ten chapters that cover topics ranging from politics and the economy to entertainment and athletics. Each chapter is a two to three minute video that relates and applies the ancient wisdom of the Greeks to our modern, American society.

Additionally, National Geographic Education, through its partnership with Cengage Learning, will distribute GGG with accompanying curriculum and lesson plans to over 1 million high school history classes from grades 8-11 nationwide.

GGG is a celebration and mission for us to question, ponder, and take action to strive to be genuinely "great." With insightful interviews, punchy text on screen, animations, and archival shots, each chapter is a fast-paced, informative exploration especially designed to appeal to a young audience. Preview the ENTERTAINMENT episode below, and stay tuned for more from this exciting and pioneering ten-part series!

HERITAGE WEEKEND & CLASSIC ROUND UP!

The National Hellenic Society would like to thank every single person who made it out to Las Vegas this past October to participate in our Heritage Weekend and Classic!  For those who attended, and for those who may have missed it, we've put together a few links for you to visit to get a sense of what this year's event was all about!  We hope to see all of you again at next year's event!

"Heritage Weekend" - A recap of the weekend's events by Terry Poulos (with photos!) 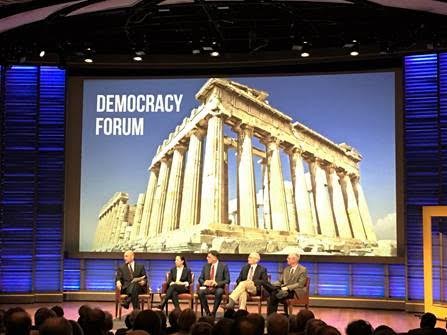 The nationally acclaimed National Geographic Museum exhibit, The Greeks: Agamemnon to Alexander the Great, represents one of the Museum’s most successful draws to date with over 85,000 visitors and 100 additional groups scheduled for this week alone according to the Museum’s curator.   The exhibit has served as the centerpiece and springboard for several events over the summer that was concluded with a “Democracy Forum” hosted on Monday, September 26 at National Geographic’s Grosvenor Auditorium.  The Forum was moderated by NHS member, Bill Antholis, Emeritus Managing Director of Brookings and current President/CEO of the Miller Center, featured Stanford professor, author, and classist, Josh Ober; historian and leadership consultant, Brook Manville; journalist and scholar, Markos Kounalakis; and Kounalakis’ wife, Ambassador Eleni Tsakopoulos Kounalakis... Read More 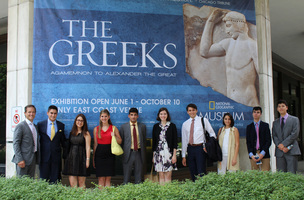 WASHINGTON, DC; July 21, 2016 The NHS and Manatos & Manatos, a leading government relations and advocacy firm, collaborated to develop the NHS Heritage America Program -- an experiential odyssey connecting Greek-American college students to their Hellenic roots, heritage and culture within the context and resources Washington, DC has to offer.  This past weekend, selected candidates met a who's-who of Greek-American decision makers, business leaders and other important contacts who will serve as future mentors and career guides for Heritage America alumni... read more & see the photos!