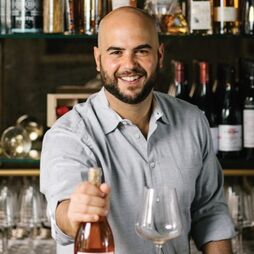 Demetri Tsolakis grew up in central Connecticut, working in his family’s gyro restaurants since he was “tall enough to pour a soda.” After a stint as an investment banker, he felt the pull of the restaurants and returned to the business determined to present Greek culinary culture in a more contemporary and true fashion. His restaurants, he says, are designed as places he would want to patronize, from the aesthetics to the food to the drink.

Tsolakis’s footprint in Bean Town began with Committee Ouzeri + Bar and has extended to fast-casual Greco, and, most recently, Krasi Meze & Wine. (Another concept is on the way, but, as not to tempt fate, Tsolakis is keeping mum about the details). Except for the fact that each concept is rooted in Greek culture, they are all very distinct from one another, with almost zero menu overlap. If that link to Greek culture forms the fabric of the restaurants, it’s Tsolakis’s deft touch as a restaurateur along with his creativity and his passion for all things Greek that are the threads tying them all together.

If the textbook on upscale Greek restaurants was written by the celebrated fish taverns in Manhattan, or the next generation Greek eateries of Chicago, it is immediately obvious upon entering his restaurants Committee or Krasi that Tsolakis has ignored those and charted a unique course. In fact, all three of the concepts that Tsolakis has created represent the epitome of perfection in each of their niches. And judging by the crowds, he is clearly onto something.